When I walked into my role in 1992 at the Maricopa Community Colleges, as a mullet-headed, green to the education world, instructional technologist. I had just a taste of what was to come with early use of the internet.

I’d been on listservs since 1987; an administered one called VOLCANO-L for geologists sharing research ideas about volcanoes. Although ancient technology, the same human social dynamics of communication happened in that email space as what we do in social media now.

My technical background started in late 1980s undergraduate classes in computer science (which I hated and left after a year), and later in research as a graduate student in Geology at Arizona State University (1986-1992) working on thesis involving analysis of Landsat Satellite image data. In that work I had been ftp-ing files, using programs like NCSA Telnet and some other crude data visualization software (was it “NCSA Layout” or “NCSA Image”?).

In my first “real” job at Maricopa, I wore a title of “Programmer Analyst / Instructional Systems” (never quite sure what that meant). I found on an old CD a video (at a whopping standard resolution then of 160×120 pixels) of some kid who looks like me introducing himself.

The part that stands out to me as formational to where I am now was the idea of sharing code and learning from the work of others via the Info-Mac Archives, on a machine at Stanford University named sumex-aim.

I was learning HyperCard, and other people were uploading their HyperCard stacks to this site via ftp, all of it completely open to me and others being able to look at and learn from their code. There was not much consideration of “copyright” or worry about someone stealing an idea to profit from it. It seemed like all the ideas were stolen in some way or just shared in the spirit of “maybe this will help someone else as it helped me”.

I learned from the work of others, and then began the natural (for me) reflex- share back.

It was how I learned how to make the web back in 1993- I learned it from the web via the NCSA tutorial A Beginner’s Guide to HTML (no longer available but archived versions are out there): 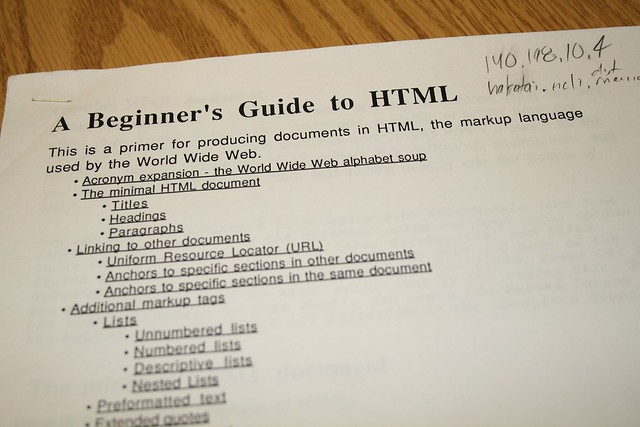 In those early days of networking, I could simply put subdomain names on local desktop computers in my office. I could plug a machine in the network and just turn it on as an internet server! I chose geological names for all of them. In that photo you can see my handwriting of the IP address of my first web server (Hakatai is a formation in the bottom of the Grand Canyon), running on a Macintosh SE/30.

It was a magical time. It was a way of learning by doing that registered with me, a way that I could not do in a workshop or from a book. And it was not just pure coding- what arose out of this space was personalities, faults and virtues, and what some people call a reputation economy.

I was interested in both creating a place to share resources and information within my college system, but by putting it on that web server in my office, it was just as easily shared with anyone else on the early web.

But more than that, I thought if people could learn to remember a few HTML codes, they could create their own hypertext, media rich content. Im June 1994 I ran a workshop for about 8 faculty members at South Mountain Community College, creating my first successful open educational resource (long before that was a term) the Writing HTML Tutorial: Once made available for use and remixing on the web, other people translated it into Spanish, French, Japanese, Italian, and even Icelandic. Out of that last connection, I ultimately was invited to do a workshop in Reykjavik and got to meet in person Gudjon, the teacher that had done the translation of my tutorial. This potential for connections, collegiality, and opportunities simply by sharing your work has evolved into the way I approach everything I build or create, and has kept me on the path of seeking more True Stories of Open Sharing. So much has changed since then (at least the mullet is gone) in terms of technology, but that human factor of getting to learn from, and to know as a friends, people from around the world I would have never met, has always been, and still is, the best thing ever.

AND SO IT WAS WRITTEN...

A SPLOT on the web: OWLTEH – Stories